“Checking In”: The Flows of Dunham’s Performers

To date, our work on Dunham’s Data has revolved around our goal of building a timeline to represent where Katherine Dunham was every single day for the three-plus decades of her most substantial travel, and exploring the methods that a historical analysis of the everyday offers up. However, most of the time, Dunham was not on her own. She may sometimes have flown to the next stop on a touring route while her performers were sent by boat or train, but then they reconvened in these destinations around the world. Many performers joined the company from various locations along the way. Some remained with Dunham for a few months and others for decades. When performers left, sometimes they went home, and sometimes they remained in places to which they had traveled with the company. Even among those traveling at a given time, the company configuration was always changing — for example during a few-week gap between large-scale concert engagements in two different cities, half of the company would be temporarily laid off, while the other half would join Dunham in the nightclub circuit. We were interested in tracing the different flows through which performers gathered and dispersed over time.

To begin, we constructed an initial dataset of 400+ personnel in an information share with Mapping Touring, and then added further performers and details from our archival materials, such as birthplace and nationality, as well as disambiguating birth-, stage-, and nick-names. From there, we identified a list of around 150 performers — both dancers and musicians — who appear in the archives for the period on which we are currently developing the daily schedule (1949-59). Because Dunham’s company size was constantly contracting and expanding, we discovered that there cannot be a single start and end date for each performer’s membership. Instead, we have come to a data schema more suitable for the fragmentary archives of this piecemeal work, based on the “check-in”  — a metaphor Kate borrowed from social media. 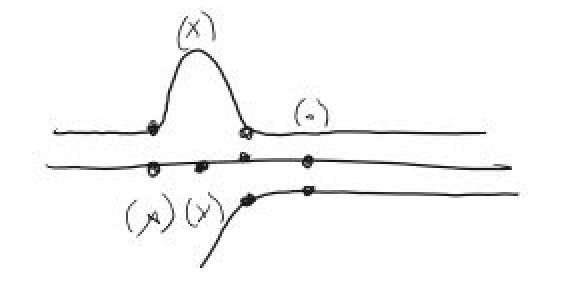 Each time we have a comprehensive list of everyone with Dunham at a given moment — such as housing arrangements for all performers in a given city, payroll for the week, or a cast list for a particular television special — we “check in” all of those people in our dataset (and expand the dataset if they are not yet represented). Performers who are not checked in are checked out for that particular date. We also have what we describe as non-comprehensive lists, which range from post-show production notes that mention performers who missed entrances, to lists of performers who should no longer be featured in publicity photographs because they have left the company. Above is the sketch that Kate made during our team meeting to explain how the check-ins work, using three imaginary performers: In the first comprehensive check-in there are two performers present, and one implied absence; then another comprehensive check-in with one performer present and two implied absences; a third check-in has all three present; then a non-comprehensive check-in with two performers present for certain  and one whose presence is implied.

Kate, Harmony, and Takiyah are all working to gather this data, which Antonio has began to visualize as an interactive Sankey diagram. A screen grab from an early experiment in visualizing the flows of Dunham performer check-ins is up at the top of this page. In this interactive visualization, the drummer Julio Mendez has been highlighted, and his red line flows with and apart from the company. Mendez is performing from the beginning of our time window in 1949-50 while the company is in Europe and North and South America. Then he does not perform with the company again until the beginning of 1955, when he is briefly employed again for some Latin American shows but does not continue on afterwards. He re-joins again for a tour that begins in Australia in 1956.

However, how we represent these flows of individuals is still very much a work in progress and up for discussion among the team. For example, do we emphasize the performers who stayed the longest? Are we interested in the years in which performers joined the company for the first time, or are we more excited by visualizing where they come from and how that constitutes the identity of the company at a given moment? What are the implications of thinking in terms of cohorts of performers who were employed at the same time, sharing not only theatres but also meals in various cities and countries? In the long term, we are interested in collecting further data to begin looking at how the in-flows and out-flows of particular performers shaped the company repertoire over time. In the meantime, we are still dealing with the nuances of developing this dataset. For example, what happens in the visualization with performers who are injured but continue to travel with the company until they return to the stage? What about when Dunham pursues nightclub or film engagements with fewer dancers? One of the things we’re learning about Dunham is that pre-existing models and definitions, such as “what is a company,” aren’t so clear-cut in her case. This flow-based diagram has helped us to shift our thinking from “who is in the company” to “who is performing with Dunham at this moment,” which opens up new kinds of questions and analytical possibilities for us as dance scholars.