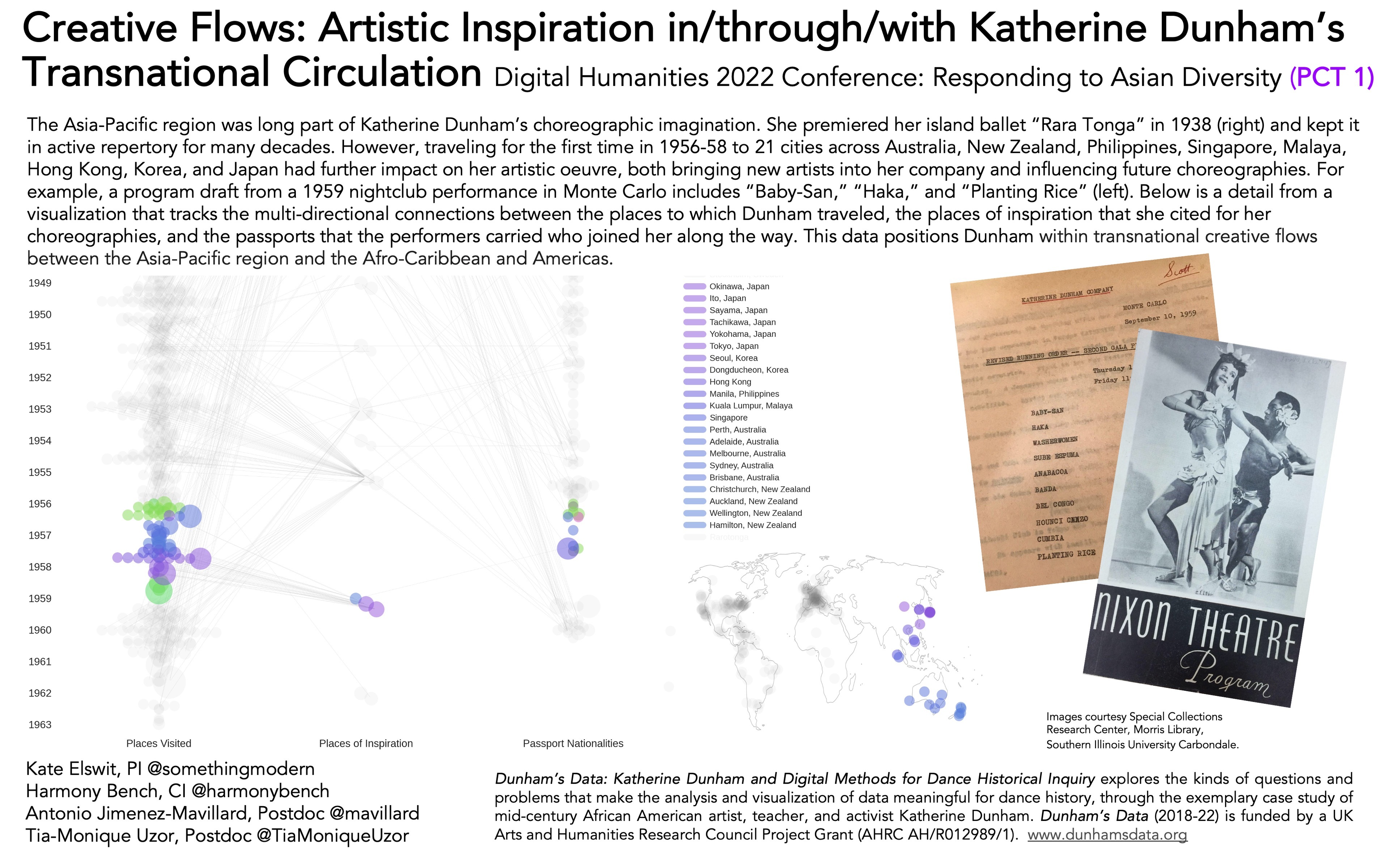 We created this poster for the Digital Humanities 2022 conference in Tokyo, which gave us an opportunity to highlight one particular aspect of what we think of as Dunham’s transnational legacy in relation to the conference theme of “Responding to Asian Diversity.”

First, a bit of background for anyone encountering our work for the first time: This poster by Kate Elswit, Harmony Bench, Antonio Jimenez-Mavillard, and Tia-Monique Uzor comes from the AHRC-funded project Dunham’s Data: Katherine Dunham and Digital Methods for Dance Historical Inquiry. The overarching project explores the kinds of questions and problems that make the analysis and visualization of data meaningful for dance history, through the case study of 20th century African American choreographer Katherine Dunham, who toured the globe extensively, picking up performers and gathering culturally specific movement for her repertory as she went. Drawing on data-informed research in theatre history and feminist and anti-racist approaches to data, our manually-curated core project datasets represent Dunham’s everyday itinerary of over 5000 days spent between 1947-1960 on every continent but Antarctica, the almost 200 dancers, drummers, and singers who travelled with her, and the over 300 interconnected elements of repertory that they performed. We employ spatial, network, and computational analyses as they are used in performing arts research to better understand how Dunham’s choreography materializes the influence of the many geographic places that infused her diasporic imagination, and trace the flows of performers working together over time and space as a dynamic collective, and how their embodied knowledge supports the creation and transmission of Dunham’s repertory.

And now about the components of and ideas behind poster itself: The company’s international touring brought them into contact with a broad range of rhythms, gestures, and referents, which then circulated onward as Dunham toured. The visualization on this poster uses Pandas (for data management) and Seaborn/Matplotlib (for data visualization) to create and show a “dependency” tripartite graph connecting three datasets that we curated: Dunham’s everyday itinerary of visited places (left column), the places that inspired Dunham’s repertory (middle column), and the passports that her dancers, drummers, and singers carried (right column). The full visualization is below. With nodes organized chronologically, their edges make visible multidirectional relationships between Dunham’s diasporic imagination and the many places she visited, including locations outside the Afro-Caribbean with which her work is generally associated, as well as how the performers that she picked up along the way contributed their culturally specific embodied knowledge to the creation of her repertory. 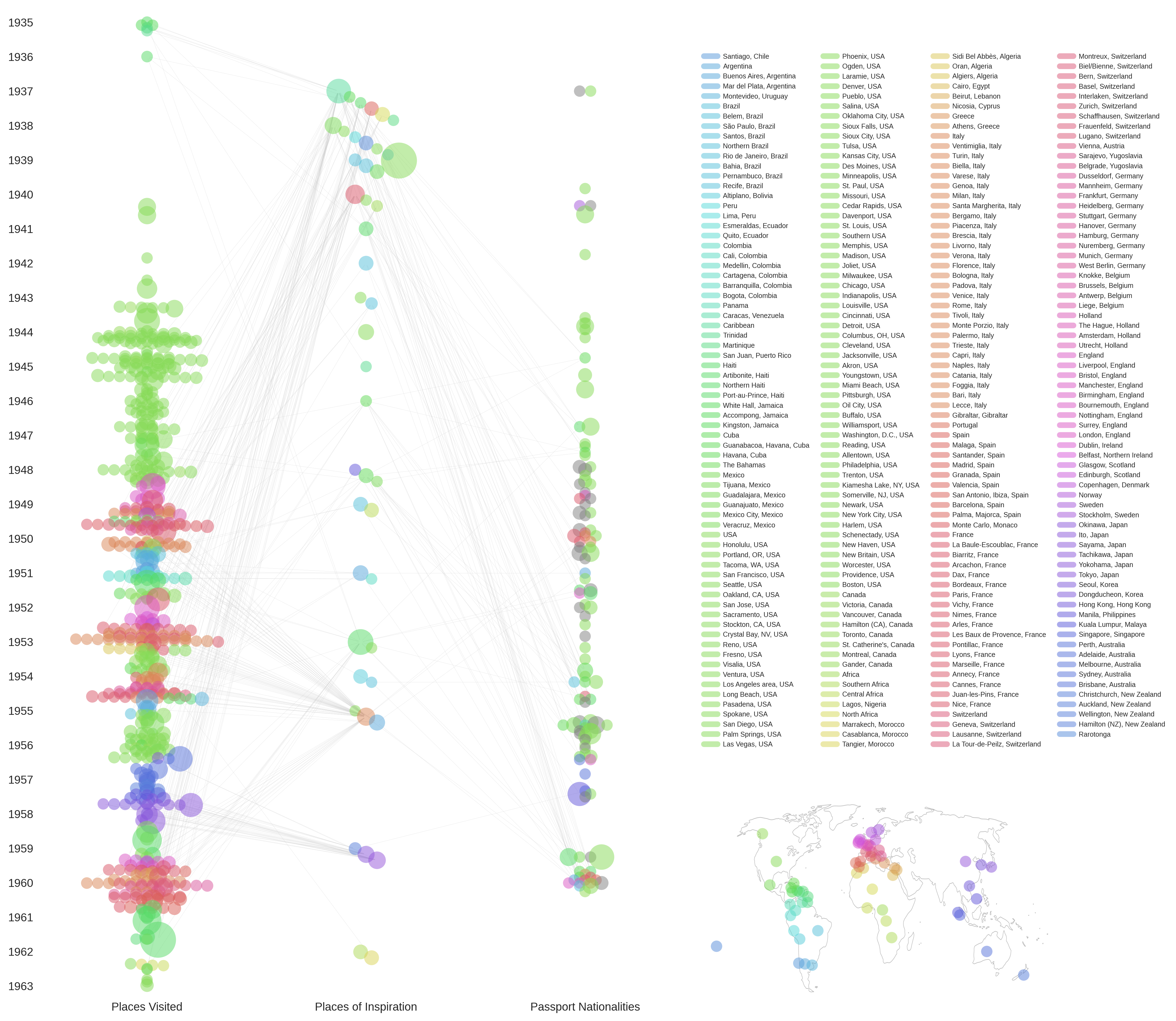 Long before she traveled to the Asia-Pacific region, Katherine Dunham represented that region through such pieces as her 1938 island ballet “Rara Tonga,” which stayed in active repertory for decades. An image of that number can be seen on the cover of a program from the Nixon Theater in the upper right of the poster. Dunham finally travelled to the area in 1956, when she undertook a two-year tour of Australia that then led to further performance engagements in New Zealand, Philippines, Singapore, Malaysia, Hong Kong, Korea, and Japan, for which she was joined by two Australians, a New Zealander, and eight Filipinos. Our analyses make traceable potential ripples of Dunham’s influence in the many locations the company visited, including Dunham’s long term impact in the Australian entertainment landscape (Bollen 2020), and the ways in which her presence is narrated in the development of Japanese Butoh (Michio 2019).

In the poster, we highlight that period of the tripartite graph to show this specific period of Dunham’s history, during which she created new dances inspired by these locales. For example, after attending Maori cultural events, the company began to perform a number based on the Maori haka, which was later combined with “Baby San” and “Planting Rice,” pieces referencing her recent travels, to form Eastern Suite (Bench and Elswit 2022). You can see these pieces listed in the upper right of the poster on the running order for a 1959 nightclub performance in the resort town of Monte Carlo, and the related locations are indicated by the purple bubbles in the middle column of the poster’s tripartite graph–which Dunham identifies as “New Zealand,” “Japan,” and “East Asia.” This is in contrast to “Rara Tonga,” which was imagined prior to Dunham’s travel in the Asia-Pacific region. All, however, were incorporated into Dunham’s repertory and toured internationally with the company.

Because scholars generally consider Dunham’s artistic and political project to be one of tracing Africanist elements in diasporic movement practices throughout the Caribbean and Americas, they have not fully accounted for Asia as a site of inspiration for her choreographic work, or how her influence may have extended throughout the area as performers joined and left the company while touring, as well as the impact of her depiction of African-diasporic practices on local audiences. This poster connects with current scholarship on the African diaspora beyond the Black Atlantic toward various Black internationalisms (Patterson and Kelley 2000, 32), and situates Dunham as part of the larger transnational creative flows between the Asia-Pacific region and the Afro-Caribbean and Americas.